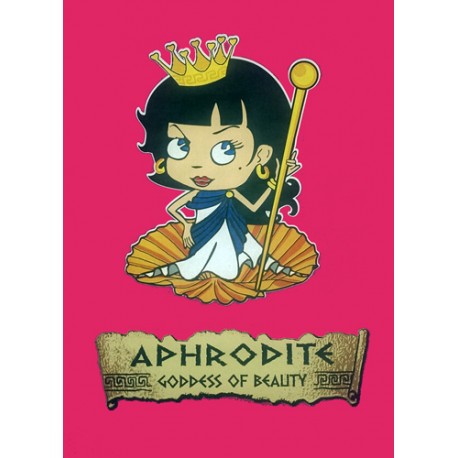 Aphrodite was the goddess of love, desire and beauty. Apart from her natural beauty, she also had a magical girdle that compelled everyone to desire her.

There are two accounts of her birth. According to one, she was the daughter of Zeus and Dione, the mother goddess worshipped at the Oracls of Dodona. However, the other account, which is more prevalent, informs us that she arose from the sea on a giant scallop, after Cronus castrated Uranus and tossed his severed genitals into the sea. Aphrodite then walked to the shore of Cyprus. In a different version of the myth, she was born near the island of Cythera, hence her epithet "Cytherea".

Aphrodite was married to Hephaestus; however, she had an affair with her brother Ares, god of war. When Hephaestus found out about the affair, he devised a plan and managed to humiliate his wife and her lover to the other Olympians. Her holy tree was the myrtle, while her holy birds were the dove, the swan, and the sparrow.

Aphrodite represented sex, affection, and the attraction that binds people together.