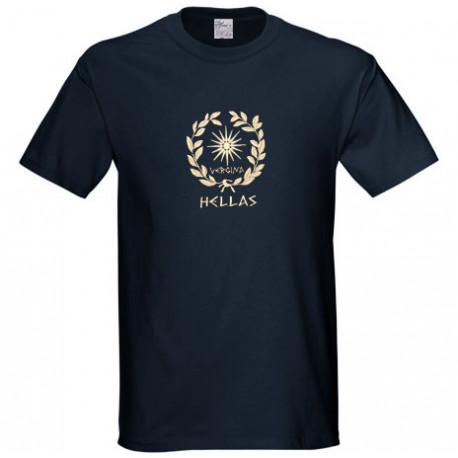 HANDMADE T SHIRT WITH 100% GREEK ORGANIC COTTON PEIGNE AND THHE EMBOIDERED DESIGN OF THE SUN OF VERGINA.The Vergina Sun - (Greek: Ήλιος της Βεργίνας) (also known as the Star of Vergina, Macedonian Star, or Argead Star) is a rayed solar symbol appearing in ancient Greek art from the 6th to 2nd centuries BC. It came to prominence following archaeological excavations in and around the small town of Vergina, in northern Greece, during the late 1970s. There it was depicted on a golden larnax found in a 4th-century BC royal tomb belonging to either Philip II or Philip III of Macedon, the father and half-brother of Alexander the Great, respectively.